The town of Kyustendil is the center of the Kyustendil District with a population of 48 000 inhabitants. The town is located 88 km southwest of Sofia. It is the municipal center of 71 settlements. It is located at the foot of Osogovo Mountain at a valley 525 m above sea level. In the past the town was developed as a garrison and spa center. The towns development is closely connected to its geographical location and the natural resources.

During V-IV c. B.C. the Thracians from the Danteleli tribe founded a settlement here, attracted by the healing mineral springs. During I century the Romans transformed the town into a significant fortress, trade road and a spa resort. The name of the town at that time was Ulpia Pautalia. During I-II century Pautalia grew into an administrative, economic and cultural center. One of the main roads from Serdika to the Adriatic Sea crossed Pautalia. Due to the frequent barbarian attacks during IV-V century a second fortress was built on the Hisarlaka hill, which continued to function during the medieval period as well. It was later demolished by the Ottoman conquerors in XV century. After the division of the Roman Empire into Western and Eastern the town fell within the limits of the Byzantine Empire. In a deed from the Byzantine emperor Vasilius II the town was mentioned under the name of Velbuzhd. During 1197-1207 the town entered the limits of Bulgaria. During the First and the Second Bulgarian Kingdom the settlement was an important fortress and an Episcopal centre. During 1355-1395 Kyustendil was the center of the domains of despot Deyan and his sons Ivan and Konstantin Dragash. In XIV century the town fell into the Ottoman yoke. During the Revival Period the town flourished again. Its citizens took active part in the fights for church independence and national liberation. The town was liberated from the Ottoman yoke in 1878.

If you want to buy a Paragliding flight over Kyustendil, click here.

Tourist sights are: the History Museum, the ruins of ancient Pautalia, the churches "St. Georgi" from XII-XIII c., "Sveta Bogoroditza" /Holy Virgin/ (1816), "St. Dimiter" (1866), the Pirkov Tower from XVI-XVII c., the Ahmet Bey mosque (1531), the gallery of the Vladimir Dimitrov-Maistora (The Master)

The mineral springs in Kyustendil have a temperature of up to 76oC and a capacity of 35 liters per second and are suitable for healing the locomotory system, the peripheral nervous system, gynaecological, skin and other diseases.

If you want to reserve a SPA Holiday in Kyustendil , click here.

On the territory of Kyustendil are located the following natural landmarks: parts of the "Rila" Natural Park, the "Tzarnata reka" Reserve /Osogovo Mountain/, the "Rilomanastirskata gora" Reserve, the "Gabra" Reserve/Vlahina Mountain/.

The most famous rocky phenomena on the territory of the district are the Stobski Pyramids and the "Hanged Stone" - a single rock in northwestern Rila Mountain.

The most famous monasteries within the limits of the administrative district are: The Rila Monastery and the Boboshevski Monastery. Well-known wineries in the region are: Kyustendil, Boboshevo and Granitza.

The "Vladimir Dimitrov - Maistora (The Master)" ArtGallery in Kyustendil has a permanent exhibition of 200 paintings of the artist and works of other great artists who were born and worked in the town. Vladimir Dimitrov- Maistora (The Master) is a prominent Bulgarian artist. He depicted the rural lifestyle and labor, the folk traditions and celebrations. On the background of flowers and orchard trees he depicted images of peasants from the Kyustendil region-an embodiment of vitality, moral and physical beauty.

The Kadin Bridge in the village of Nevestino, District Kyustendil is a great construction-engineering facility built over the Struma River during 1469-1770. The bridge has 5 vaults, each of different size, with the biggest in the middle. According to the legend the master-builder built in his wife's shadow so that the bridge became stronger.

The Hisarlaka in Kyustendil is a park with remains of a Roman fortress dating back to I-III c.

The town of Rila has a population of 3100 inhabitants and is the municipal center of 4 component settlements. It is located at the western foot of Rila Mountain in a beautiful valley along both banks of the Rilska River. The town lies at a distance of 64 km from the district center of Kyustendil. The distance between the town of Rila and the Rila Monastery is 21 km.

Remains from an ancient settlement, most probably the Roman town of Sportela, have been discovered on the territory of the town.

The Rila Monastery is included in the UNESCO Cultural Heritage List. It is the biggest and the most visited monastery in Bulgaria. It was founded in the X century and has preserved priceless evidence of the Bulgarian history. The present outlook of the monastery dates back to the XIX century. The monastery has the shape of an irregular square. The oldest building in the complex rises in the middle of the yard - the stone tower, built during 1334-1335.

Immediately next to it there is a small church from 1343. The rest of the monastery was built during 1834-1837. The mural paintings and the wood carvings of the iconostasis are incredibly beautiful. The whole complex is very impressive. The four-story housing quarter consists of 300 monks' cells, four chapels, a kitchen, a library, a room for the abbot and rooms for benefactors.

Raphael's Cross is a masterpiece of art. It is made of an 81 x 43 cm piece of wood. The cross is named after its creator - the monk Raphael. 104 religious scenes and 650 small images are carved on the cross. The work on the cross continued until 1802 when its creator lost his sight. The monk dedicated 12 years of his life to make the cross using fine chisels, small knives and magnifying lenses.

The town of Sapareva Banya is located at an altitude of 750 m at the northeastern foot of Rila Mountains. It lies at a distance of 15 km east of the town of Dupnitza and 56 km from Kyustendil. The town is an administrative municipal center with 4 component settlements. Sapareva Banya has a population of 4 400 inhabitants. Until 1943 the town was known under the name of Gorna Banya.

The town is famous for its hot mineral springs and the most emblematic among them - the 103oC geyser. It is the only one on the Balkan Peninsula and the hottest in Europe. The mineral springs have a capacity of 18 litres per second and a healing effect for diseases of the locomotory system, the peripheral nervous system, skin diseases and other.

Life has existed in the flat valleys of the Valyavitza, Dzherman, and Dzhubrena Rivers for more than seven thousand years. The territory of the region boosts of many monuments of past cultures. Within the limits of the town was discovered the Neolithic settlement of Kremenik and in the north-western part - the ancient town of Germania. The town existed during the Roman epoch and the Middle Ages. Germania is the home town of Velizarius, the prominent military commander of the emperor Justinian. The medieval settlement was an Episcopal center until XIV c. During the excavations were discovered streets, housing and public buildings, fortified walls etc.

Among the tourists sights are: the medieval churches from XII-XIIIc. "St. Nikola", "St. Archangel Michael" (in the village of Saparevo); the Revival period churches "St. Forty Martyrs", "St. Georgi"(Sapareva Banya), "Sveta Bogoroditza" /Holy Virgin/ (the village of Sаparevo), "St. Joan Bogoslov" (the village of Ovchartzi) and "St. Nikolai" (the village of Resilovo). The churches impress with their architecture, mural paintings and wood carvings.

The resort village of Panichishte is located in northwestern Rila Mountain at an altitude of 1350 m. The site has a dense coniferous forest, meadows and a lake. There are also ski facilities in the area. 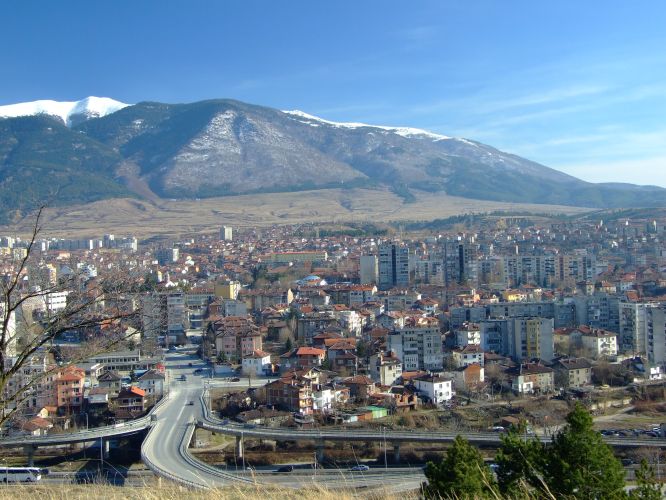 The town of Dupnitza has a population of 37 000 inhabitants. It is located on the main road Sofia-Thessaloniki at a distance of 39 km east of Kyustendil. Dupnitza is a municipal center with 16 component settlements. The town is situated at the northeastern foot of Rila Mountain in the Dupnitza Valley at an altitude of 510m. The valley is open to the south and east towards the Dzherman River valley.

The economic life of the settlement is connected to the ore-mines in the vicinity of the town. Remains from the Thracian culture, an ancient settlement, a necropolis and a Roman tomb have been discovered in the town of Dupnitza and its vicinities.

The name of Dupnitza appeared in the Ottoman registry books for the first time in XV c. Later one can find descriptions of the town in the memoirs of the knights Arnold Fon Harf, Evliya Chelebi and Ami Buye who have visited the town.

Among the tourists sights are: Eski Mosque from the XVI c., the clock tower from 1782, the churches "St. St. Konstantin and Elena" (1902), "Sveta Bogoroditza"/ Holy Virgin/ (1789), "St. Nikolai" (1844) and the remains of a fortress in the "Tower" site. Dupnitza is a starting point for many tourist routes in Rila Mountain.

The town of Boboshevo has a population of about 1 500 inhabitants and lies 56 km southeast of the district town. The town is a municipal center with 11 component settlements. The town lies on the banks of the Struma River. Within the limits of the municipality have been discovered remains of an ancient settlement from II-IVc. To the south of the town there is an ancient necropolis. The town's name was mentioned for the first time in 1526 in the Ottoman registry books.

Among the tourist sights are: the churches "St. Anastasii" from 1666, "St. Iliya" from 1678, the remains of the "St. Todor" church from XIII-XIVc. and the Boboshevo Monastery. Within the region of Boboshevo there is also a winery.

The Boboshevo "Saint Dimiter" Monastery is located on the eastern slope of the Ruen peak at a distance of 4 km from the town of Boboshevo. The Monastery was founded during the Second Bulgarian Kingdom. From the old monastery complex has remained only the church which is decorated with magnificent murals. It is a single-nave church with semi-cylindrical vault and a double-layer roof. The mural paintings in the church follow the Christian temples decoration system typical for the Middle Ages. 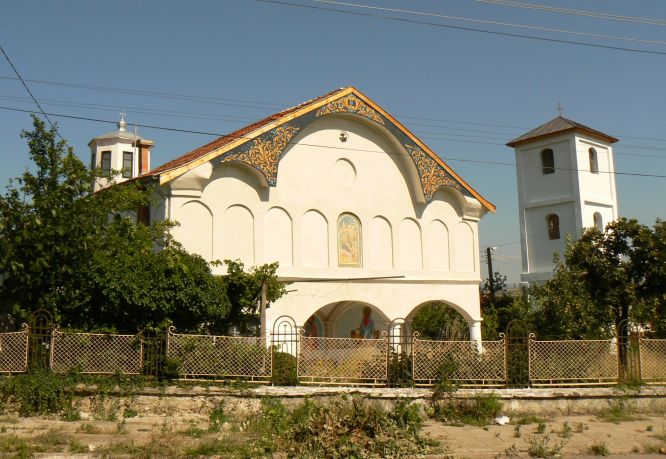 The town of Kocherinovo has a population of 3 000 inhabitants and lies 56 km southeast of Kyustendil. The town is a municipal center with 10 component settlements. To the east of the town are located the Stobski Pyramids. These are rocky formations at the southwestern foot of Rila Mountain. The pyramids are sculptured in rust-tinted fluvioglacial sediments with a thickness of 40 m. They are situated along the left valley bank of the Rilska River. The pyramids are of different shape and are covered with rocky blocks. They are the natural landmark of the region. 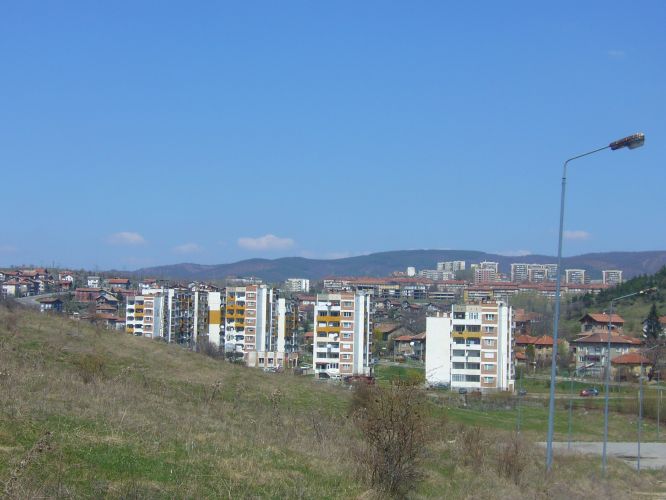 The town of Bobov Dol

The town of Bobov Dol has a population of 7000 inhabitants and lies 42 km northeast of Kyustendil. The town is a municipal center with 17 component settlements. The town is located at the eastern foot of Konyavska Mountain along the Razmetanitza River. On the territory of Bobov Dol lie the biggest deposits of brown coals in Bulgaria. Their exploitation has began at the end of XIX c. Among the tourist sights is the "St. Nikola" church from 1822.

The village of Treklyano is a municipal center of 18 component settlements in the Kyustendil District. The village lies at a distance of 40 m north of Kyustendil in the valley of the Treklyanska River and has a population of 400 inhabitants. The first written evidence of the village dates back to 1576 according to some Ottoman documents.

The village of Nevestino is a municipal center in the Kyustendil District with 22 component settlements. The village lies at a distance of 13 km east of Kyustendil and has a population of 700 inhabitants. There is a mineral spring in Nevestino. There are also remains of a Thracian settlement, a Roman villa, a fortress and a medieval church. Here is located the "Kadin Bridge" over the Struma River which is proclaimed for a monument of culture from the XV Century. The village is described in the Ottoman documents from 1576.