Devnya Springs are located in the very beginning of the Devnya River near the town of Devnya. They are the biggest karst springs in Bulgaria. There are approximately 30 in number combined in seven spring groups.
The spring with the biggest flow of water is called Dipsisa. It forms an imposing lake that used to be overgrown with vegetation. It is cleaned up now, so that the tourists who ride in boats on its waters are able to admire its beauty from a close distance. Crystal clear water with a temperature of approximately 18°C springs from several spots on the bottom of the lake. This spring is also known as the Bottomless Spring. A large water-mill situated in the southern end of the spring is powered by its waters.
The small Havuz Spring, also called the Magical Spring, is the most beautiful one of all Devnya Springs. A 4-5 m-high oval wall is built around it. It creates a waterfall that powers the nearby water-mill. Beautiful variegated long, thin algae have taken roots in the bottom of the spring and the walls of the basin. According to an old legend, this spring was the favourite spot of Marciana, sister of Roman Emperor Trajan. That is why it is also known as Marciana. 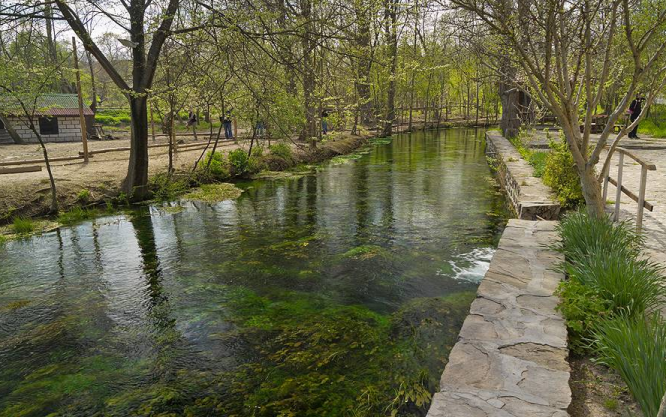 East of Havuz Spring, almost in a row, lie Ludetinata (Delidushka), Adata, and Suyutliyata Springs. The impetuous and beautiful Ludetinata Spring forms a 35 m-wide lake. The main outlet of the spring is situated at the eastern end of the basin and creates a powerful underwater fountain. Adata Spring is 40 m in diameter and forms two basins connected to each other by a channel.
Okoto (The Eye – Bashgyoz) and Halkaliyata Springs lie at the foot of the limestone wall called Golyam Kayrak in the northern part of Devnya Springs. Their waters flow into Chernevska River.
Devnya Springs do not freeze in winter. Their flow-rate is barely affected by the seasonal changes in the weather. Every second the outlets of the springs discharge up to 3500 litres of water. It forms smaller and bigger streams that merge together to give birth to Devnya River.
The considerable water resources of Devnya Springs have been used ever since ancient times. A huge Thracian settlement existed in the vicinity of the lakes. The foundations of an old fortress were discovered near the springs. Devnya coin treasure was also found in this place: a large number of 263 kinds of silver and gold coins. It is currently preserved in the museums of Sofia and Varna. The abundant waters of the springs are still used by many water-mills and several factories situated in the area.
The great natural wealth and the beauty of Devnya Springs attract lots of tourists.