Bulgaria adopted Christianity in 864 and it immediately became binding for all subjects of the Bulgarian ruler. The new religion swept into Bulgaria from the neighboring Byzantium bringing the whole of its traditional organization and structures. The monastery was one of them. The first ever reliable records testifying to the existence of a Bulgarian monastery can be found in the “Response of Pope Nicholas I to Inquiries of Bulgarians” dated to 867. Following the example set by their neighbors, the Bulgarian people began to set up the monastery institution after the Byzantine model that had already for centuries been in existence. The city monasteries were the first to appear in Bulgaria, i.e. monastic abodes located within the boundaries of the big city.

At the turn of the 9th century there appeared another type of monasteries distinguished for their location rather than their internal organization. These were situated outside inhabited localities, sometimes at quite distant places, sometimes even in complete isolation.

Monasticism in Bulgaria was represented by the monk who was a man of letters. The monks were the ones who created the Bulgarian literature of the time, the ground-work of the all-Slavonic Orthodox literary writings. Their activities outlined the main function of the Bulgarian monasteries as the country’s major literary centers. 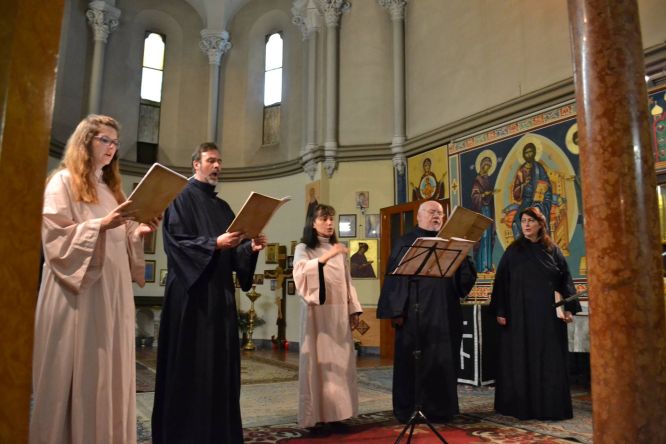 If you want to buy a voucher for concert performed by Orthodox Choir click here.

The rock monasteries should never be omitted when speaking of the monasteries in medieval Bulgaria. As the very name suggests, these sacred abodes – the monastic cells and the temple – were built or rather hewn out into the rocks. The cave or rock temples, although obeying different principles of construction, had inside decoration quite similar to the ornamentation, mostly pictorial, of the rest of the Christian cult buildings. The rock monasteries in Bulgaria appeared at places where nature allowed their construction: deep river valleys, plateaus, mountain slopes. No doubt, of greatest significance for the historical development of the Bulgarian monasteries were the complexes in Bassarabi in Northern Dobroudja (10th century), in Cherven and Ivanovo (12th – 14th centuries) and the Aladja Monastery in the vicinity of Varna (14th century).

If you want to hear Bulgarian Orthodox Chants, listen to the video.

If you want to buy CD disk with Bulgarian Orthodox Chants click here.

In 1396 the state Bulgaria was liquidated as an institution, by the Turks, which was followed by the withdrawal of the independence of the Church. The Turnovo Patriarchate was closed down, and the Bulgarian Church – put under the supremacy of Constantinople.

And then the monasteries came to the forefront. After the inevitable decline, abatement of their functions and even fading away of some of them, there began a process of visible rebirth for the majority of the monastic establishments. A great number of monasteries were strengthened, rebuilt or only decorated with paintings. The monasteries were thus destined to become the strongholds of the Bulgarian national spirit, centers of literary activities whose goal it was to gather and preserve the most outstanding works of Bulgaria’s medieval literature, architecture and art.

Bulgarian monasteries are the only national institution which has always shared in the destinies of the Bulgarian people, both at times of independence and magnificence, of foreign domination and despair. In the absence of a State and a Church the monasteries were the spiritual haven, the places where the nation was given shelter, a tower of strength for showing resistance, a point of departure along the road to the future. Being centers of Orthodox Christianity, guardians of the Bulgarian literary culture, treasure-troves of the religious art, the monasteries have remained even to this day those symbols of the Bulgarian spirit that are best identified with the nation.

If you want to buy a Bulgarian Orthodox icon with certificate click here.