Starting point: in your hotel in Sofia – your guide will wait for you at the reception with „TOUR 4 FUN” sign.

Departure:
from May to September - every day
April and October - on request
*depending on the weather forecast

For larger groups, Tour 4 fun can offer rates on request. Please send us an email at info@tour4fun.net

- Pick up from your hotel in Sofia and transfer by car or minibus to the Iskar Dam and back;
- 2 hours long yachting;
- Catering - ( proschuto and mozzarella bites, sweets, wine )
- Captain on board 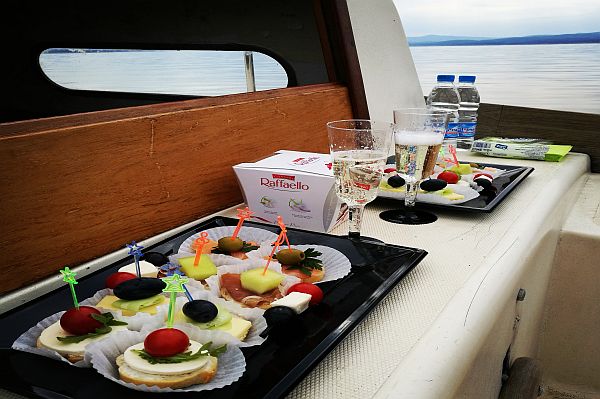 Read more about the dam and its location:

The Iskar dam is the largest dam in Bulgaria. It is situated on the Iskar River and provides 2/3 of the water for the capital Sofia, also being used for producing hydroelectricity. The dam has a total volume of 673 million m3, of which 580 million are in use and the rest is reserve. The reservoir has a drainage basin of 1,046 km² and is 25 km long. It is situated at 820 m above sea level, its dam being 204 m long and 76 m high.

The initial plans for the construction of a dam on the Iskar date to as early as 1900-1901, immediately after the building of the Pancharevo Hydroelectric Power Plant. In 1921, the idea was once again brought up, but its accomplishment failed due to the municipality's inability to indemnify the residents of the neighbouring villages of Gorni Pasarel, Shishmanovo and Kalkovo. Topographic photographs and a geological assessment regarding the dam were made and observations of the Iskar's water level at Pasarel were conducted in 1932-1941 in order to build what was initially called the St Peter's Reservoir (named after the monastery in Dolni Pasarel which was supposed to be near the reservoir).

New geological research related to the reservoir's construction began in 1947 at four places between Gorni Pasarel and Pancharevo. The place at the Iskar's 37th kilometre was chosen as the most suitable in terms of geology, topography and economics. The waters of the river were further studied between 1947 and 1948.

Work on the projects for an Iskar water power system commenced in early 1948 in the newly established Energohidroproekt. The design and the first draft were created by a team under the engineer Moiseev with the assistance of Soviet specialists. The project was approved by the expert council of the Ministry of Electrification and Melioration, and it was planned that the reservoir had a working volume of 520 million m3 and a reserve volume of 60 million m3. The preparative works began in 1949, the main construction was carried out in the end of 1950, the water power system being officially opened on 6 September 1954.