The town of Vidin is the centre of the district and has a population of 54 000 inhabitants. Vidin is located on the bank of the Danube River in the Vidin Plain at an altitude of 35 m. The town has the form of a semi-circle with its streets and buildings oriented towards the river. Vidin lies at a distance of 210 km northwest of Sofia. Vidin is the municipal administrative centre of 33 settlements. The settlement was established in III c. from the Thracian tribe of Tribals and has the name of Dunonia which in translation means high and fortified place. The town was part of the Roman provinces of Mizia, Upper Mizia and Coastal Dakia. During the Roman Epoch the town was known under the name of Bononia. In IV and V c. the fortress was destroyed by the invasions of Avars and Huns. Emperor Justinian rebuilt the fortress again in VI c. During archaeological excavations in the fortress were discovered public buildings, sculptures, inscriptions and coins. During the middle-age Bulgarian State the fortress was restored again under the name of Badin. In XII and XIV c. it was the headquarters of the Bulgarian boyars Rostislav, Yakov Svetoslav and the King Ivan Sratzimir. Ivan Sratzimir was the Bulgarian ruler of the Vidin Kingdom. In 1388 he became a vassal of the Turkish sultan and after the Nikopol battle he was captured by sultan Bayazid and taken to Bursa (in present-day Turkey) where he dies. The settlement fell under the Ottoman yoke in 1396. During 1794-1805 it was the centre of an independent possession of Osman Pazvantoglu. In 1794 during feudal unrest Osman Pazvantoglu conquered Vidin and proclaimed himself for its governor. The Turkish government made him a pasha. French, Austrian and Russian Consulates were opened in the town in XIX c.

On the territory of the district are also located: the remains of the Roman towns of Ritzaria by the village of Archar and Kastra Martis in the town of Kula, the Alibutinovo Rocky Monastery, the cave "Magurata" with prehistoric rocky paintings, the Belogradchik rocks, the Rakovishki, Izvorski and Dobridolsi Monasteries.

The natural landmarks of the district are: the "Chuprene" reserve, the Belogradchik rocks, the caves "Magura" and "Mirizlivka".

The most famous wineries of the region are Vidin, Novo selo, Ruptzi and Rabisha.

The Baba Vida fortress lies on the banks of the Danube River. The main plan of the castle hasn't sustained many changes. It occupies an area of 0,95 hectares. It is surrounded by a 12 m wide and 6 m deep defense pit. The fortress has the shape of a square oriented with its angles to the south, north, east and west. The fortress has two walls. The internal wall is higher and is 2,2 m thick. There are 9 towers on the fortress. Four of them are corner and five are side ones. The external wall is lower and has two towers. The castle-fortress is accessible only from the northern part. The Baba Vida fortress is one of the most well-preserved medieval defense facilities. It is built over the ancient walls of the fortress Bononia. The Bulgarian construction on the fortress began during X c. At the end of XVII c. the fortress was adjusted to having firearms as well. In 1964 the fortress was proclaimed for a monument of culture.

The police department - the Konak in Vidin is an architectural monument of local significance. It was built in XVIII c. After the Liberation it was turned into a museum.

The cross-shaped barracks in Vidin is a monument of culture of national significance. It was built in 1801. The barracks is a two-storey massive building in the form of an equal-armed cross and with a built-up area of 1 260 m2. The interior creates a feeling of stability and solemnity. In 1965 the building was restored and adapted for a museum. It houses the ethnographic museum where one can see typical activities for the region such as: ploughing, sowing, harvesting, threshing and haymaking. An accent in the exhibition is placed on the fishery, vine-growing and wine making. From the domestic activities is represented the weaving with all the tools for processing wool, hemp and cotton. From the people's artistic crafts are represented the goldsmith's trade, wood carving, ceramics making and others.

The Mausoleum of Antim I was built in 1934. The relics of exarch Antim I were placed in a sarcophagus in the basement of the museum. Antim Ist was the first Bulgarin patriarch from 1872. He contributed a lot to the formation of a national unity and the cultural development of the Bulgarian people. After the failure of the April Rebellion he was sent to exile in Mala Asia. After the Liberation he was the chairman of the First Great National Assembly.

The Magura in the village of Rabisha is a cave with unique paintings from the late prehistoric period. The paintings depict human figures, animals, plants and lines. The oldest and the most interesting are the paintings in the Sanctuary. In the cave is also depicted the annual calendar consisting of 366 days with the marked winter and summer solstices.

The town of Belogradchik has a population of 6 000 inhabitants and lies at a distance of 54 km southwest of Vidin. Belogradchik is a municipal centre with 17 component settlements. Belogradchik is situated in Western Bulgaria at the foot of the western part of Stara Planina. The average altitude of the town is 522 m.

If you want to buy a Hot-air ballon trip above Belogradchik, click here.

Belogradchik originated on the site of a Roman fortress which predetermined its development as a settlement. Its importance grew significantly during the period of the Vidin Kingdom in the Middle ages. The settlement was described in the Ottoman documents from 1454. Belogradchik was a small agrarian and craftsman's centre. After the Liberation in 1878 it developed as a tourist centre.

The tourist sights of the town are: the history museum, the Revival-period Panov's house, the church "St. George" (1868), the Belogradchik fortress and the rocky formations, the "Magurata" cave and the Rabishko Lake.

If you want to buy a Full day excursion to the Rocks of Belogradchik, click here.

The medieval fortress in Belogradchik was part of the defense system of the Roman, Byzantine and Ottoman Empires. Using the natural inaccessibility of the rocks the Romans maintained a fortress in I-III c. to defend the strategic roads. In 1805-1837 the fortress was widened and reconstructed with spaces for firearms under the leadership of French and Italian engineers. The fortress consists of three lines of walls with yards among them. Each of the yards has an independent defense system. The area of the fortress is 10 211 m2. The fortress has two gates - Vidin kapiya and Nish kapiya. The fortified walls are 10 m high and 2,50 m thick with embrasures for rifles. There are also three bastions for 15 cannon guns. Belogradchik fortress is a monument of culture of national significance. 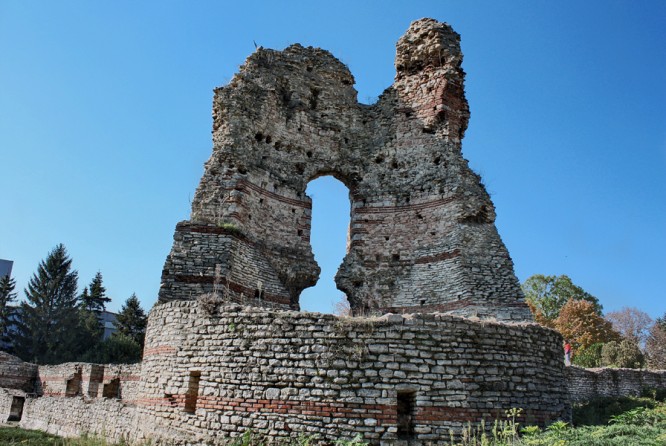 The town of Kula has a population of 4 000 inhabitants and lies at a distance of 32 km southwest of Vidin. Kula is a municipal centre with 8 component settlements. The town owes its present-day name to the big Roman tower in its centre. "Kula" in Bulgarian means "tower". The Hungarian traveler Felix Kanitz first localized Kastra Martis in XIX c. Later the archaeological research confirmed his guesses.

After the conquering of these lands in Ist century all the lands between Danube and Stara Planina were included in the Province of Mizia and later began the construction of the Danube complex of fortified settlements, towers and other facilities. The main centre was Ritziaria (near the village of Archer). At the end of III c. and the beginning of IV c. the border was fortified with new fortresses built on significant places. The Kastra Martis fortress occupied a strategic place near the most western pass of Vrashka Chuka and defended the road from Bologna to Singidunum (Belgrade). In 377 Emperor Grecian passed through the fortress with his legions on the way to Thrace. The fortress was demolished by Goths, Huns, Avars and Slavs.

After a break of several centuries, when life ied out on the site, the fortification was artially restored during the period of the Vidin Feudal Kingdom. Near the ruins of the fortress there is a museum exhibition of findings from the excavations on the site. Visitors can see pottery, marble columns, a bronze statue of Venera, tools etc.

The tourist sights of the town are: the church "St. St. Peter and Pavel" built in 1863 and the remains of the ancient town. 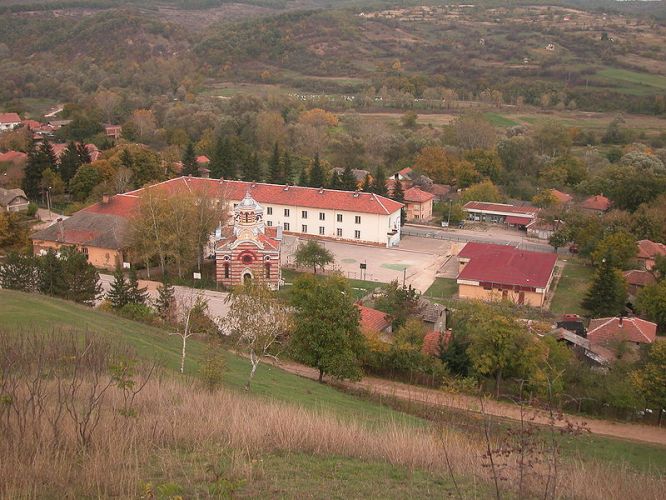 Primary School and Orthodox Church, the town of Dimovo

The town of Dimovo has a population of 1 500 inhabitants and lies at a distance of 34 km southwest of Vidin. Dimovo is the municipal centre of 22 settlements. On the territory of the town there is a Thracian settlement and findings of silver coins from II and I c. B.C. The municipality is specialized in agriculture and canning industry. 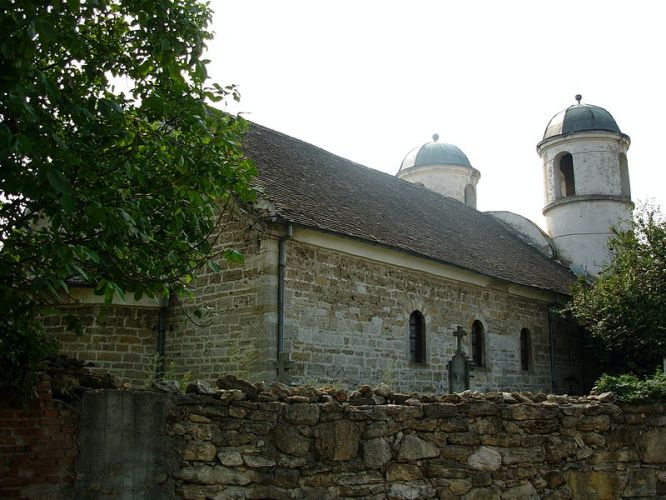 Church "Assumption of the Virgin", town of Bregovo

The town of Bregovo has a population of 3 000 inhabitants and lies at a distance of 28 km northwest of the district centre. Bregovo is the municipal centre of 9 settlements. The settlement was founded during the Middle Ages. The municipality is specialized in the production of grains, technical cultures, fruits, vines and stock breeding.

The village of Ruzhintzi lies at a distance of 42 km south of Vidin. The village is situated in the western part of the Danube Plain on the left bank of the Lom River. Ruzhintzi is the administrative centre of 9 settlements. The region is specialized in the production of soy-beans, sunflower, grains, vegetables and vine-growing. 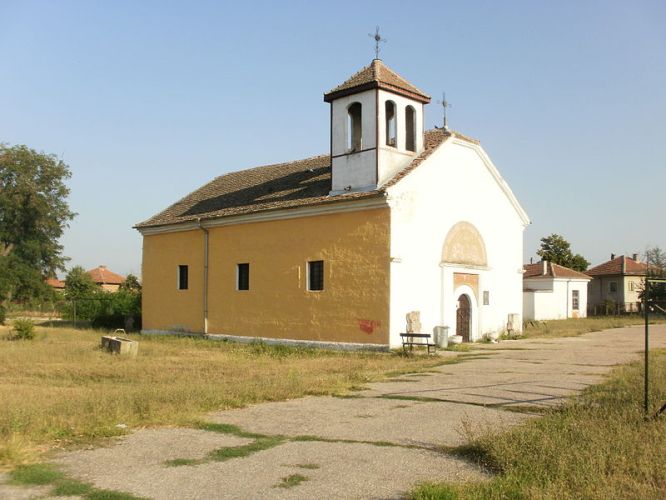 Church "Birth of the Mother of God", town of Dunavtzi

The town of Dunavtzi has a population of 3 000 inhabitants and lies at a distance of 10 km southwest of Vidin on the bank of the Danube River. In the vicinities of the town there are remains of late ancient times and medieval fortresses. The region is specialized in the production of vines, fruits, vegetables and technical cultures.

The town of Gramada has a population of 2 000 inhabitants and lies at a distance of 30 km southwest of Vidin. Gramada is the municipal administrative centre of 7 settlements. The municipality is specialized in the production of grains, fruits and wines. 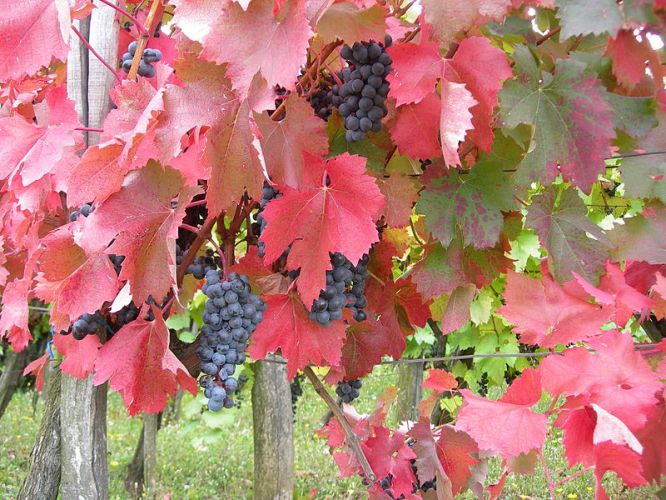 The village of Novo Selo lies at a distance of 29 km northwest of the district centre. It is the municipal centre of 4 settlements and has a population of about 1 500 inhabitants. The municipality is specialized in the production of grains, vegetables and vine-growing. In the region there are archaeological traces of the late Bronze Age, a Roman and a Slavic settlement. 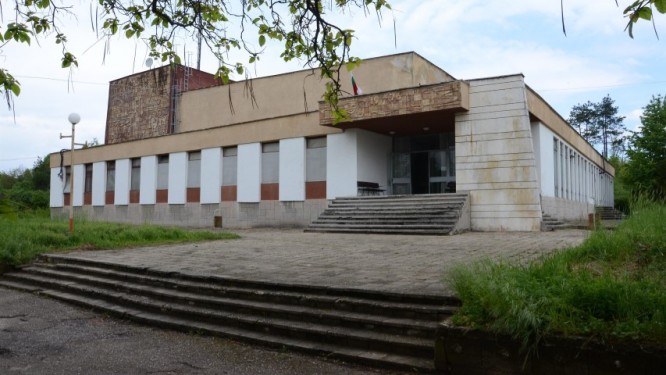 The library in the village of Makresh

The village of Makresh lies at a distance of 35 km southeast of Vidin. It is the municipal centre of 6 settlements and has a population of 600 inhabitants. The municipality is specialized in agriculture. In the region there are archaeological findings from the early Bronze Age and the period of the Roman Empire.