Starting point: in your hotel in Sofia – your guide will wait for you at the reception with „TOUR 4 FUN” sign.

Prices per tourist for a 60 minute ATV tour

*Tourists must be wearing clothes and shoes appropriate for the season and suitable for mountain terrain.

For larger groups, Tour 4 fun can offer rates on request. Please send us an email at info@tour4fun.net

- Pick up from your hotel in Sofia and transfer by car or minibus (for groups more than 4+ tourists) to Stara Planina mountains and back;
- Safety helmets (will be provided at the starting point location.)
- 1 hour long ATV trip;
- Leader during the ATV trip.

If you want to learn more about Stara Planina Mountains, please click here. 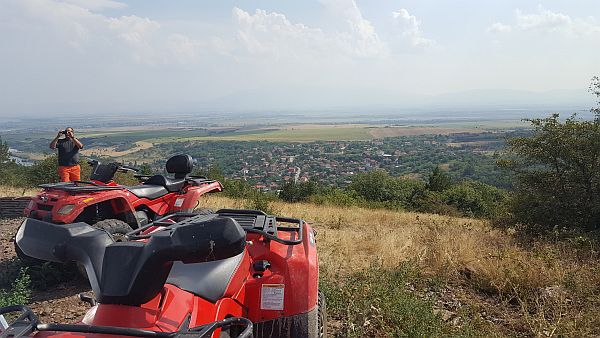 Break your daily routine and bring some adrenalin to your life!
We offer you the opportunity to ride an ATV and have an enjoyable mountain adventure!

Novi Iskar:
Novi Iskar is a town in Western Bulgaria, located in Sofia City Province, which is a part of the Municipality of Sofia. It is often regarded as a northern suburb of Bulgarian capital Sofia and lies in the northern part of the Sofia Valley, with the Iskar Gorge beginning just north of the town.

Katina Village:
The Katinski Pyramids are rocky formations by the village of Katina, Municipality of Sofia, Sofia District. They are formed by the detritions and the erosion of the Pliocene sandstones and clays on the south western slope of the Sofia Section of the Western Stara Planina Mountains. At their foundation there is a labyrinth of deeply hewn caves with protruding steep irregular columns and walls of up to 30 m height among them. Some of the pyramids are covered with rocky caps. The pyramids are rust-brown in color. The Katinski pyramids were proclaimed for a natural landmark in 1962 and occupy an area of 12,50 hectares.

Stara Planina Mountains:
Stara Planina Mountain is the most remarkable mountainous range in Bulgaria. Its previous name is Balkan, which is taken as a name of the whole peninsula. The range is 530 km long and occupies an area of 25 500 m². It is the longest range in Bulgaria. It divides the county into Northern and Southern Bulgaria. The range has two diverse sections. The northern part is lower and is called the Fore - Balkan, while the southern part is higher and is called the Main Stara Planina Range. The crest of the Main Stara Planina Range is the watershed between the Black Sea and the Aegean Sea. From the west to the east the Balkan Range is divided into the Western, Central and Eastern part. The western part is rather wide with a length of 45 km and Midzhur (2 168 m) as its highest peak. The central part is narrow with a length of 15 km and the highest peak of Botev (2 376 m). The Botev Peak is the highest peak of the whole Balkan Range. The eastern part is gradually widening and divides into a Northern and Eastern sub - divisions all heading to the east. The height of cape Emine is only 60 m. The highest peak of the eastern part is peak Bulgarka (1 181 m).